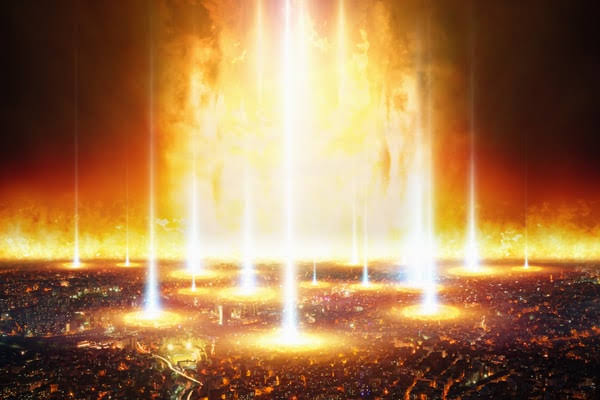 Today, most Christians think that the day when Jesus comes a second time, the world will be destroyed right away and the saints who are saved will enter the kingdom of heaven. Does the Bible say so? First, let us take a look at the words of Jesus.

Lk 18:8  “I tell you, he will see that they get justice, and quickly. However, when the Son of Man comes, will he find faith on the earth?”

Appearance of Jesus at the Judgment Day and His work

Isa 66:15-16  See, the LORD is coming with fire, and his chariots are like a whirlwind; he will bring down his anger with fury, and his rebuke with flames of fire. For with fire and with his sword the L ORD will execute judgment upon all men, and many will be those slain by the LORD.

When Jehovah comes as the Judge at the last day, what does the Bible say about His coming? What is the purpose of His coming? There is the same prophecy in the New Testament.

2 Th 1:7-10  … and give relief to you who are troubled, and to us as well. This will happen when the Lord Jesus is revealed from heaven in blazing fire with his powerful angels. He will punish those who do not know God and do not obey the gospel of our Lord Jesus. They will be punished with everlasting destruction and shut out from the presence of the Lord and from the majesty of his power on the day he comes …

This is the same scene where Jesus comes as the Judge at the last day. How will Jesus appear at that time? What is the purpose of His coming?

Appearance of Jesus’ second coming and His work

However, when Jesus comes a second time, He appears in a different way and the purpose of His coming is also different.

Mt 24:30-31  “At that time the sign of the Son of Man will appear in the sky, and all the nations of the earth will mourn. They will see the Son of Man coming on the clouds of the sky, with power and great glory. And he will send his angels with a loud trumpet call, and they will gather his elect from the four winds, from one end of the heavens to the other.”

Jesus Himself prophesied about His second coming (Mt 24:3). How will He come a second time? Jesus prophesied that He would come on the clouds. He said nothing about judgment and punishment. Jesus only said that He would gather His elect from the four winds for their salvation.

Lk 21:27-28  “At that time they will see the Son of Man coming in a cloud with power and great glory. When these things begin to take place, stand up and lift up your heads, because your redemption is drawing near.”

Like the words in Matthew 24, this is a prophecy about Jesus’ second coming on the clouds. When Jesus comes a second time, the Bible says, “Stand up and lift up your heads, because your redemption is drawing near.” In other words, the Bible tells us to prepare to receive salvation. The time of Jesus’ second coming is not the day of Last Judgment when we enter the kingdom of heaven.

Zion where the Second Coming Christ gathers His elect

If Jesus comes a second time to gather His elect according to the prophecy of the Bible, where does He gather them? It is Zion where God’s feasts are observed (Isa 33:20).

Mic 4:1-2  In the last days the mountain of the LORD’s temple will be established as chief among the mountains; it will be raised above the hills, and peoples will stream to it. Many nations will come and say, “Come, let us go up to the mountain of the LORD, to the house of the God of Jacob. He will teach us his ways, so that we may walk in his paths.” The law will go out from Zion, the word of the LORD from Jerusalem.

This is the prophecy for our age where the Day of Judgment is near. In the last days the people of God stream to the mountain of God’s temple, Zion. God will teach them His ways in Zion. This means that the Second Coming Jesus, who appears in the last days, restores faith to His people through the words of the truth so that they can be saved. Just as Jesus said, “Will he find faith on the earth?” there is no one who has enough faith to receive salvation, before Jesus comes a second time. After Jesus ascended 2,000 years ago, the devil sowed the weeds and the world became full of lawlessness as Daniel had prophesied (Mt 13:24-43; Da 7:25). The Bible says that Jesus will come a second time in the world where there is no faith, gather His people to Zion, and lead them to the truth of salvation.

Let us realize the teachings of the Bible that Jesus’ second coming is different from His coming as the Last Judge, and receive Christ who has already come to Zion a second time in the last days, and be saved.

The Savior of Each Age and the New Name